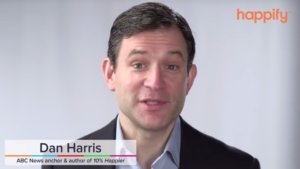 Dan Harris joined the ABC news team in 2000 and quickly became a well-respected anchor; his reporting included natural disasters, mass shootings, and combat (he himself traveled six times to Iraq). The way he tells it, he was one of those people who would roll their eyes at things like meditation and yoga.

Until 2004. That’s when he had an on-air panic attack that caused him to engage in the kind of self-examination he’d previously dismissed. On his journey, he discovered meditation, which became the cornerstone for his recovery and led him to write 10% Happier: How I Tamed the Voice in My Head, Reduced Stress Without Losing My Edge, and Found Self-Help That Really Works — a True Story.

Since then, Dan has become an important spokesperson for meditation, bringing the practice to people who might not otherwise be interested due to assumptions and misconceptions. iBme is proud to call Dan a friend and to partner with the 10% Happier team to make meditation more widely understood and available.

Know people who are wary of meditation? You might want to share one of these short videos with ex-skeptic Dan Harris: