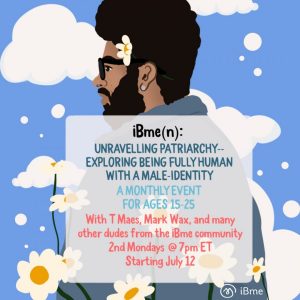 What is male identity? What does it mean to be a male-identified person? iBme teachers/mentors Mark Wax and Anthony (“T”) Maes found that on iBme retreats, young people were hungry for this conversation, wanting to better understand who they were and to support each other. When they decided to create an online affinity group for male-identified people, they knew that it had to be about unraveling patriarchy and detoxifying masculinity. Grace Welker, a writer for iBme, talked to Mark about the new group and what they’re up to.

“Male-identified” is a mouthful. Why this term?

We struggled a lot with the language. We’re really aware that we are in this interesting moment in history in which language is changing, and it’s changing in a more equitable direction, but we don’t have the words yet. I think in ten years, we’ll have a word for a “male-identified” or “masculine-dominant” or “masculine-leaning” person. So that someone can call themselves something other than a “man” which has all this historical baggage to something biological that just really doesn’t apply to the human heart-mind.

So many people right now, myself included, are intending to be activists in deconstructing the gender binary. We’re using the idea of “male-identified” because individual experience can be more complicated than a binary, more like a spectrum with “maleness” at one end and “femaleness” at the other; and for whatever reason, in regards to this group, your needle is tipped slightly toward the male side. It could be one degree. So there’s this effort to de-emphasize the idea that there are two genders. “Male-identified” is a step in that direction.

Part of what we’re doing in the group is exploring what an individual’s subjective experience of masculinity is — and it’s awesome to hear how each person is super unique and masculinity means something very different to each of us. We can be incredibly open-minded around what informs our identities.

What surprised you in the first gathering?

If anything surprised me, and continues to surprise me, it’s that meeting online can have as meaningful an impact as being in person — in some ways more so. Of course in other ways, it’s limited. But really, it works! We can meet like this and have an impact on each other. And create genuine community and authentic exchange.

Isn’t it a lot to take on the unraveling of patriarchy?

Yeah, it is a lot to take on. [laugh] But you have to start somewhere. I think that so much of what is exciting about the information epoch that we’re in is that humans who haven’t had a voice, because of power dynamics, are getting the opportunity of a somewhat more “level-playing field” because of the internet, among other things, and we can learn so much from those who have historically not had a voice getting the opportunity to speak up.

What is emerging is awareness of the depth of the hole that we’ve dug ourselves into. It is daunting. And there is grieving that needs to be done around recognizing the extent of suffering and harm that has been perpetrated by patriarchal structures, as well as repairs that need to be made. But there’s also something hopeful — even if the truth is awful, there’s something about the clarity of seeing the landscape we’re in that means, “Oh, this can be impacted”.

The despair that results from not doing anything is far worse. Humans still have a good chance of effecting positive change and healing.

How does mindfulness contribute to what you’re creating?

It is the key tool in the tool box. If we’re using the metaphor of unraveling the patriarchy, mindfulness is the knitting needle that starts to undo the knots.

Mindfulness teaches us to not look away from that which is difficult. Instead, we support ourselves even in the reality of suffering, the reality of things not being the way we want them to be. With mindfulness, we can look the problem right in its eye, understand maleness in a new way: by getting intimate with it, getting curious about it, knowing what we don’t know, admitting our vulnerability, being open to new experiences of a masculine identity.

Fundamentally, mindfulness has the capacity to offer a clear picture of reality and the cause-and-effect nature of things. I’m thinking more and more about mindfulness as learning to learn, and it applies to every subject. So when we apply it to the idea of a masculine identity or the historical arc of patriarchy, there’s a way we can look, be curious, and learn from it. Mindfulness becomes the key for opening a new door in working with our identities.

What would you say to a young-adult male-identified person who isn’t sure whether this is for them?

I get it. I think it’s really normal to feel a sense of obstacle toward trying something new. And if you identify as male in an unconventional way or if you tend to be more non-binary but associated with masculinity, it’s likely to be an extra risk. We are looking to dissolve what we might call the archetype of “maleness” and form a new one.

I also want to say that iBme prioritizes creating the safest spaces possible. Everyone is equal, that’s foundational and we’re committed to that. Honestly, iBme is the greatest place to try something new, to take a risk and do something you normally wouldn’t.

What are some of the traditional norms around masculine connection?

One thing I heard a while ago that stuck with me is that, especially if they don’t know each other well, men tend to socialize around specialization — there’s a sense of competition around who knows the most about something. There’s also a tendency for someone to dominate or for the most charismatic person to take over. Men of my age and older seem to have a lot of experiences like this and we’re wary.

I do think that’s changing in a lot of places with the younger generations. We’re excited to support that and to learn from them. So much of my own work has really come from just listening to the teens. What makes them hopeful about the future? What are the particular issues in their generations?

How are things different with today’s young people?

T and I have recognized that it’s actually becoming cool to be ethical and to be kind. Obviously, there’s a way that there are still toxic norms around popularity, like on social media there’s still a lot of toxicity and bullying that happens.

But there are a growing number of people who are starting to support emotional maturity and emotional intelligence and vulnerability and honesty — there’s a way that authenticity is becoming a currency, which really was not the case when I was younger. That feels like something to be hopeful about. The young folks we are working with are modeling that in a really positive way.

Can you share something you learned or unlearned as a male-identified being?

In my journey around my own experience of my masculinity, it’s been amazing to see what my culture was turning me away from learning. I have my mindfulness practice to thank for the recognition that I’m queer. I think that I was conditioned in such a hetero-normative culture, under the threat of violence if I felt anything that aberrated from that. And it took a lot of meditation for me to realize that I have genuine feelings that fit into the LGBTQIA+ experience. And claiming that has been an incredible part of my adult life.

As someone who identifies as male, as I grow in my mindfulness practice, I’m feeling an ever-expanding sense of possibility around what that can look like, what expressing myself as a male can feel like and appear as.

What do you and T want to see this group become?

We, the mentors, are holding the space, but we really want to co-create something with the young people who show up. They are the critical ingredient; it doesn’t work without them. There are tons of adults who want to be involved but we are keeping the numbers small so that the youth voice and energy is moving things forward. 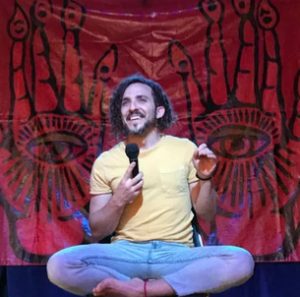 Mark Wax is deeply grateful to be working with iBme. Mark has been practicing meditative arts for 20+ years and is a passionate student/practitioner/devotee of several culturally-rooted wisdom traditions. He has worked for Yoga International, the Himalayan Institute, and Spirit Rock Meditation Center. He has had the privilege to spend many months of his life on silent meditation retreats as well as 5+ years deepening his practice through living in spiritually-centered communities. He has multiple certificates as a yoga teacher and an Ayurvedic Yoga Specialist.

Mark has worn many hats at iBme since first mentoring on a retreat in 2015. He participated in the first cohort of iBme’s Teacher Training and currently helps lead retreats and other programming as well as serves on the Teachers Advisory Council and a few other committees inside of iBme’s collaborative leadership system.