As an intern with iBme, I have had the opportunity to interview several interesting people in the field of mindfulness. Most recently, I spoke with Marc and Doug Worthen about their work spearheading school-based mindfulness initiatives (read Stress, Anxiety, Pressure: Responding to the Teen Mental-Health Crisis).

At the end of this conversation, Doug turned to me and said, “We are trying to make my position available at other schools. How would your life be different without the mindfulness program at Middlesex?”

That certainly got me thinking … I feel that mindfulness has saved my life in the past year. And I was introduced to meditation by Doug himself, the first ever mindfulness director to come out of MDI! I took his class freshman year as a student at Middlesex (an independent secondary school for boarding and day students in grades 9-12) and although I really liked the class, I did not take too much of an interest in meditation at the time. I did not practice outside of class and discontinued my practice once the class was over.

However, at the beginning of a weekly school-wide meeting called “chapel,” Doug would lead a meditation for the entire school. About a year later, I joined the lacrosse team and Doug was the coach. During practice, he would lead a short meditation with some of the players. I couldn’t escape it. Slowly but surely mindfulness seeped into my life and I didn’t even know it. I would practice every once in a while on my own, but it was never regular. Until I arrived at college.

When I got to college, the carpet was completely swept out from under me, and I tumbled into a writhing pit of depression and anxiety. I instinctually turned to mindfulness. I finally began a regular practice out of deep necessity. Although meditation did not immediately solve my problems, it gave me the space to realize I needed to take some time from school and figure out a new way to live my life, because I couldn’t trudge through that depressive state any longer.

Regular practice helped me completely change my life for the better and begin to find happiness. The seed of mindfulness that was planted in my life was one of the greatest things to come out of my entire four years at Middlesex, and I am deeply grateful.

I think it’s really important to introduce young people to mindfulness and meditation practices as tools they can use when they need them. Teaching mindfulness in schools is a great way to do that.

iBme connects teens — and others — with mindfulness through immersive retreats. Take a look at our Upcoming Retreat & Events Calendar.

Click on this image to find out more about the Mindfulness Program at Middlesex school in Massachusetts: 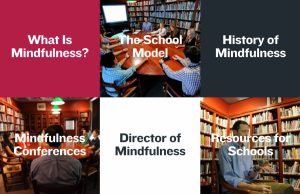